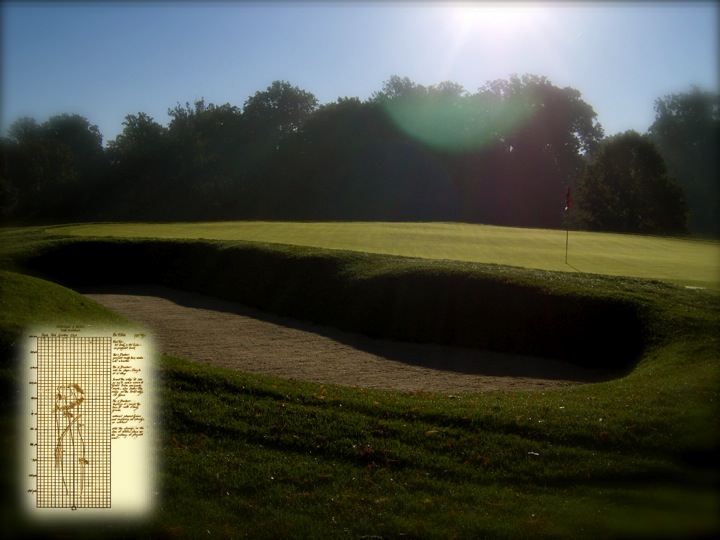 The staff and I continue to move forward with preparations for next year, the fall is a great time to focus on practices that will enhance the turf quality for next season. The cooler temperatures and the shorter days have transitioned the Zoysia Grass fairways to a golden brown. Zoysia Grass when dormant, exhibits poor recuperative capacity from cart traffic because of its slow, almost non-existent growth exhibited in the winter months. Carts are restricted to the path until the Zoysia grass is actively growing again in the Spring. 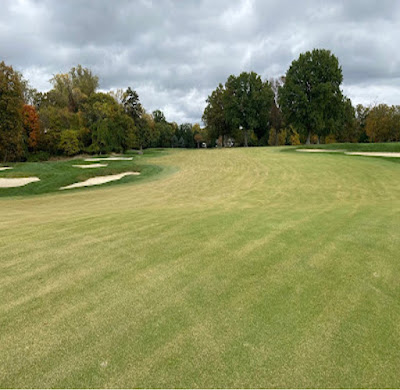 With below freezing temperatures the ground will continue to freeze rapidly and thaw slowly. The concentrated foot traffic pattern on the putting surfaces can cause damage to the root system due to the potential shearing of roots from foot traffic while thawing, thus the use of temporary greens on 6 and 7 has been utilized with the impact of shade from the trees in this area. Delays due to thawing soil and frost are more consistent as we get into the winter months, we will continue to update the membership via email when delays occur. The photo below is an example of the amount of traffic that is left from a single foursome. 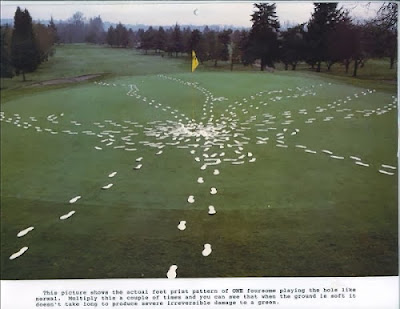 It seems as though the summer of 2022 has flown by! The preparations for next year have been in full swing for weeks now. The green aeration has been healing okay, with some greens filling in a little faster than others. (which is typical) As of October 3rd it will be two weeks of recovery for most of the greens, everyday counts! The cultural practices of aeration have really improved the growing medium as noted in the USGA report attached.
Over the coming weeks the team will be focused on the following:

This week we welcomed the OSU turf students to Hyde Park for a tour of the property and discussions for future Golf Course and Turfgrass Managers. It is always enjoyable for our team and I to connect with these groups and show off this amazing property! 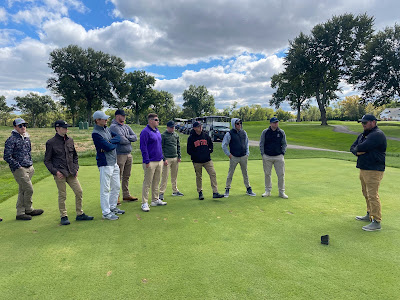 As part of our internal continuing education program at Hyde Park, team members have a chance to volunteer at professional tour event to see what it takes to prepare the course for the best in the world. In September, Drew Horn and Aaron Alsip from the Grounds team assisted the Agronomy team at Kenwood Country Club for the inaugural Queen City Classic. Below,  is an account of their experience.

Hyde Park at the LPGA

The Queen City Classic at Kenwood Country Club was the first tournament that Aaron Alsip and Drew Horn have been a part of. We did not know what to expect going in but were excited to learn and work a tournament. The first day on Sunday, we checked in and got our uniforms for the week. There was a dinner provided and we went out on the course to see our areas and different jobs that the Kenwood staff anticipated we would be doing for the upcoming week.  The main theme was that we were going to be dealing with a lot of saturation early on for the tournament. This meant we would need to be flexible on not only our jobs but also the times we may work.

Monday started off as the Kenwood staff warned us; with a lot of rain and unfortunately and  a lot of waiting. Luckily, Pat, and the Hyde Park leadership prepped us for many different scenarios and allowed us to stay and help Kenwood as needed throughout the day. We were finally able to get out on the course in the afternoon to work with the crew blowing water and trying to do anything possible to dry out the course.

Tuesday, we finally were able to start some different jobs. Drew went out and set holes on half the course. He enjoyed using the LPGA pin sheets and working with a member from the Kenwood staff. Aaron was the lead on the bunker crew. He was a vital part of keeping the crew moving and making sure the bunkers were up to LPGA standards as well as the bunker rakes in the approved areas. Wednesday, we moved on the first day of actual play with the Pro-Am that began that morning. This was the first morning we needed to really move it in our jobs. While we were working hard to be ready ahead of the Pro-Am, we both felt prepared for anything that was needed out of us.

Thursday was the beginning of the tournament. Drew moved over to spreading the grass clippings on the fairways with a turbine blower and Aaron continued leading the bunker crew. Friday and the weekend were like Thursday with our jobs and schedule of arriving at 4 am for our first shift and coming back to work the night shift around 5.

While this was a new experience for both of us, we both were well prepared to be valuable assets to the Kenwood staff for the week. We learned some new things that we can bring to the Hyde Park team as well. It was enjoyable walking the course and meeting some of the LPGA players, who were all very appreciative of the grounds crew work.

We would like to thank Pat, Zach, Arron, and the entire Hyde Park grounds crew for their extra work while we were at the tournament. And a very big thank you to the membership at Hyde Park for allowing us this opportunity and experience. It is something we will never forget!

Thank-you your feedback and comments on the course!

USGA Onsite Visit Report- Click on Image Below to View 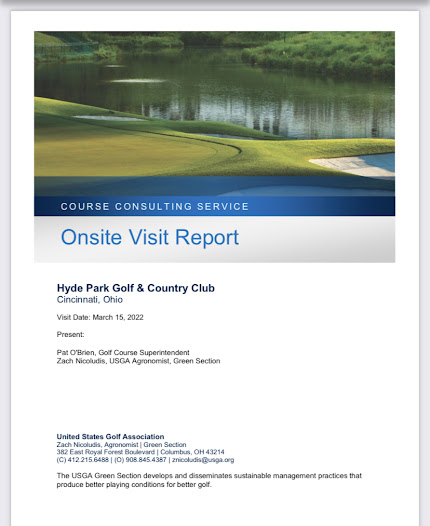 Course Conditions and Other Information 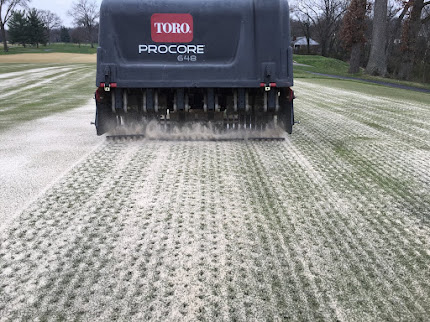